GOLD: Before Woodstock. Beyond Reality.

This is the place for publicists and artists to let people know about their bands and websites and shows and stuff. If you're going to hype your shit, this is the place to do it.

GOLD: Before Woodstock. Beyond Reality. 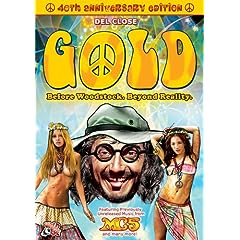 "GOLD: Before Woodstock. Beyond Reality."

Coming To DVD on March 23

Wild Eye Releasing and MVD Visual are pleased to announce the release of "GOLD: Before Woodstock. Beyond Reality." for North American distribution on March 23. Considered a 'lost' film for 40 years, GOLD has been found again... This is its first time ever on any form of home video.

In 1968, filmmaker Bob Levis led a rag-tag band of dreamers, drop outs and drug-happy darlings into the wilderness to make a movie and emerged a month later with GOLD, a bizarre and beautiful journey into the mind and madness of the late 1960s - one overflowing with fantasies of revolution, recreation and raunchy free love. At once a western, a comedy, a nudie, a drama and a musical - GOLD is a profound potpourri made in the spirit of shaking down square society, while systematically shattering every movie rule in the process. But then the film vanished, lost like the generation from which it came... Until now.

Starring the father of improvisational comedy Del Close (The Untouchables, Ferris Bueller's Day Off), Garry Goodrow (Bob & Carol & Ted & Alice, The Hollywood Knights), and fueled by the hard kickin' sounds of the MC5 and more, GOLD is a tawdry and twisted testament to a time when the world was ready for change, and the counter-culture set out to turn it upside-down.

In the current Hollywood film Pirate Radio (Focus) - the character played by Phillip Seymour Hoffman is based on Ronan O'Rahilly (Radio Caroline) - who produced the movie GOLD and got the MC5 in the movie since he was their tour manager '70 to '71.


Trailer: Gold: Before Woodstock. Beyond Reality.

Return to “Listen to the Band!”