This is the place for publicists and artists to let people know about their bands and websites and shows and stuff. If you're going to hype your shit, this is the place to do it.

Don’t let him fool you, William Shatner is no HAS BEEN!

Shout! Factory and Special Ops Media are proud to offer you a sneak preview of William Shatner’s much anticipated album Has Been, in stores October 5, 2004.

More than 35 years after the release of his debut solo album, William Shatner teams up with Ben Folds to create Has Been, a surprisingly pop-driven, lyrically potent collection of songs written by the duo. With the exception of “Trying,” co-written by Folds and novelist Nick Hornby (High Fidelity, About A Boy), “Real” by Brad Paisley, and Pulp’s “Common People,” Shatner proves to be a witty and self-deprecating poet, while Folds’ talent for crafting the perfect pop melody has never been more evident. 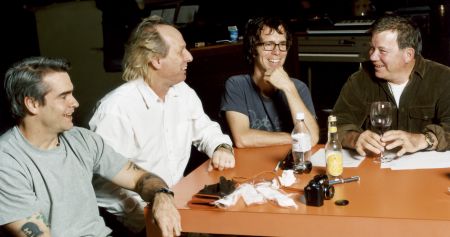 I just had my first listen to this tonight.

The duet with Henry Rollins, "I Can't Get Behind That"... downloading now...

Any word about a possible tour?
Top

Heard much of this record on the web. Classic. I mean that in the best sense. This isn't as cheese-ball a you may think.
Top
Post Reply
5 posts • Page 1 of 1

Return to “Listen to the Band!”